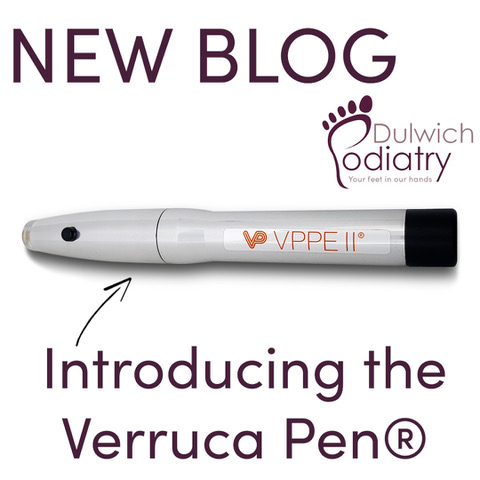 If you have been following our blogs, you will already know a bit about verrucae.  A verruca is caused by a virus (the Human Papilloma Virus – or HPV) which infects the outer layer of the skin (the epidermis).  This causes a growth in the skin which is characterised by a lump in the skin, often with hard skin overlying it.

The virus enters through tiny breaks in the skin surface and are most commonly caught in public places like swimming pool changing rooms.

The virus hides in the outer layers of the skin, making it difficult for the body’s immune system to fight off the virus.  As such they often take a long time to resolve naturally.  Fortunately, many verrucae are painless and can be ignored and allowed to take their course.  However persistent or painful verrucae can be a nuisance and you might want them treated.

At Dulwich Podiatry Ltd we offer a number of treatment options to treat verrucae as different HPV strains appear to respond better to different treatments.  Most effective treatments are aggressive and can be uncomfortable or involve dressings which have to be kept dry between treatments.

Verruca Pen® is different.  It works in a different way to other treatments and is virtually painless.  The Verruca Pen® uses plasma to disrupt the virus as it hides in the skin.  Plasma is often described as the fourth state of matter after solid, liquid and gas. When electrical energy is applied to gas it ionizes to become high energy plasma, this concentrated plasma energy is transferred to the verruca through a sterile micro-probe which focuses the treatment just on the verruca tissue.   With the use of a fine micro-probe, we can be extremely accurate in our application which will reduce discomfort and increase effectiveness.

Treatment with the Verruca Pen® is virtually painless.  The surface verruca tissue is vaporised by the plasma, triggering an inflammatory response.  Only the verruca tissue is treated, so there is no damage to the surrounding skin.  The treatment only takes a few minutes and leaves a blackened area which drops off a few weeks after treatment.

Unlike many other verruca treatments, Verruca Pen® needs no special after care.  There is no need for a dressing post treatment, the area does not have to be kept dry and you can return to your normal activities immediately.

Verruca Pen® is just one of the verruca treatment options offered by Dulwich Podiatry.  Others include:

For further advice on the best way to treat your painful or persistent verrucae, come and see one of our podiatrists.