The types of medical imaging used by podiatrists 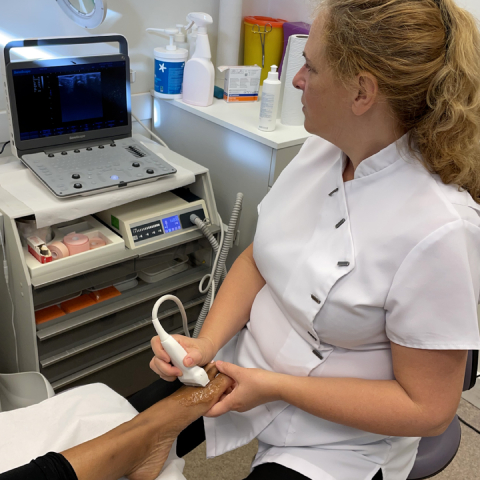 X-rays are a very quick and easy way of being able to take a static picture of inside the body. This enables clinicians to help detect a whole host of conditions. X-rays are mostly done in hospitals by trained specialists called radiographers however can be done in other premises such as dental or podiatry practices.  X-rays are passed through the body onto a receiver which then produces an image in black and white. The X-rays are absorbed differently by different parts of the body, for example bone absorbs the X-rays a lot better than body tissue. The denser object the X-ray is passing through, the whiter the image becomes due to less X-ray passing through to the receiver.

For example, this is an X-ray of a broken metatarsal bone. 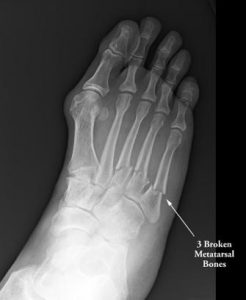 You can clearly see the separation of the whole bone on the fifth metatarsal.

Ultrasound imaging uses sound waves to produce pictures of the inside of the body, this helps to diagnose conditions which require an insight into the body. This uses the same principles as sonar (like bats do) as the sound wave strikes the object, then bounces back. The time it takes to bounce back is how the image is then produced. It works similarly to X-rays as the denser the object the brighter it shows on the image as the sound waves are reflected.

Ultrasound imaging can be used to assess injuries in the foot and ankle statically and dynamically, for example we are able to see how joints and tendons move in real time. We can use ultrasound imaging to help guide injections so that we can accurately treat our patients.

For example, this is an Ultrasound image of a stress fracture in the third metatarsal:

You can clearly see here that there is a misalignment which is a stress fracture.

MRI stands for magnetic resonance imaging which uses strong magnetic fields and radio waves to produce detailed imagines of the inside of the body.  Most of your body is made up by protons which are lined up by the strong magnets in the tube, radio waves are then fired through the body which disrupts the aligned protons. When the protons realign they release a small radio signal which is picked up by the reciever and this is how the image is made.

We may use an MRI to get a more detailed image of the inside of the foot which would combine soft and hard tissues and would give us a static detailed image which could uncover pathologies which were too small to pick up on other medical imaging methods.

For example this is a standard MRI of the foot: 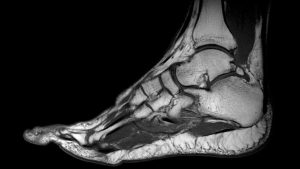 Sometimes podiatry issues can be more than meets the eye and the technology of medical imaging gives us the ability to reveal problems that lie beneath the surface.